Today my precious boy is exactly two-and-a-half years old! He is such a joy and delight! 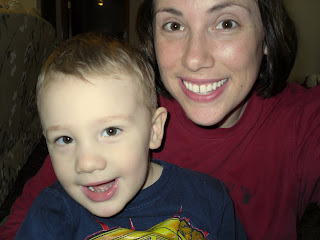 I wanted to take an official 2 1/2 picture, but I couldn't get him to sit still. So I held him in my lap and took a self-portrait, and I think it's really cute! I've been so curious to see how he's growing, but I've been making myself wait until this milestone to take measurements. So my very approximate measurements of Elias at 2 1/2 are below.

Weight: 41 lbs.
Height: 39.5"
In other words, still huge. (On growth charts, his height is above the 99th percentile, and his weight isn't even on the chart.) :) He is also still so smart, and we remain exceptionally proud of him! Some other noteworthy things about him at 2 1/2:

- He is still a HUGE eater. The doctor has been telling us for a full year that his appetite will be decreasing anytime now... and we're still waiting for that to happen. Some days he eats more than Justin! I cringe to think about trying to feed this child as a teenager.
- He is also still not a picky eater. He eats almost everything we put in front of him, for which I am extremely thankful.
- He knows all his numbers and letters, and he can read them all too. He's beginning to learn phonics, for which I completely thank Super Why.
- He can count to 50, and he's learning the upper half of 100 now too. He also knows some counting in French and Spanish, and he knows quite a few words in Spanish too, for which I thank Diego.
- He still loves to read. Other favorite things to do are: watch TV, play with trains, work puzzles, build towers with large lego-type blocks, and roughhouse with Daddy.
- He can roll his tongue like his mommy!
- He only naps about 4 days a week, but even on days he doesn't nap, he stays in his room and rests on his bed for most of the time.
- He is a great night sleeper, going to bed at 8pm (How quickly he falls asleep depends on whether or not he napped that day) and getting up at 7am.
- His language is very good, and we're thankful that he's able communicate a lot of what he wants. Generally his only meltdowns are when he's tired and not thinking clearly.
- He has absolutely no interest in using the potty, although he enjoys sitting on it every day and reading his "Potty Time with Elmo" book.

Hmm. That's all I can think of at the moment. I'll add more as I think of them! I'm also compiling a list of Elias-isms, which is cute things he says, and I'll post that another time. All in all, I am so thankful and proud of our precious blessing, and I still maintain my claim that motherhood just gets more and more fun!
Posted by Joni at 11/21/2010 02:13:00 PM