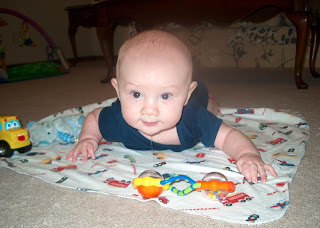 He's really enjoying spending more time on his tummy these days! So we do quite a bit of playing that way. He doesn't seem even close to crawling yet, but I'm in NO hurry for him to become mobile! He sure does do a lot of "swimming," though, with his arms and legs flailing. It is awesome. Maybe I can get a video of it one of these days. Please pay no attention to the nasty string of drool hanging off his chin. No matter how many times I wipe his chin, there is ALWAYS more slobber there. 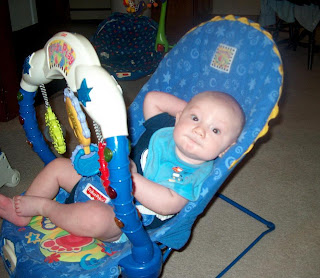 He just yesterday started making the most hilarious face where he sucks in his bottom lip so his cheeks stick out! CUTE! He has also started making a smacking sound with his mouth, which I tried to capture on video, but our camera didn't get it well. He's making new discoveries, though! He has also started to discover his feet, which he loves to grab at when I have his diaper off on the changing table. (The bulky diaper seems to interfere with his ability to draw his knees up to his chest... Has anybody else who has used these diapers experienced this?!) 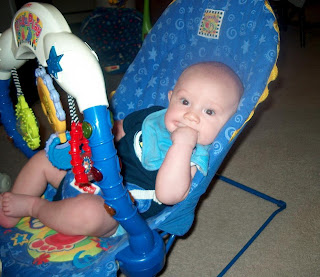 He has his 4-month checkup on Tuesday, and we're hoping the pediatrician will give us the ok to go ahead and start rice cereal! My big boy on solid foods?! I think he's starting to get ready, and I sure am ready! So I'm sure there will be hilarious pictures and stories about solid foods coming up soon!
Posted by Joni at 9/21/2008 04:01:00 PM

I can't believe it's already been 4 months! He's so adorable! Quick question - can you tell me how often the dr. told you to use the dandruff shampoo on Eli? Price still has the cradle cap and i'm so ready to be done with it!

What a sweetie! Love you guys!

You're using the BumGenius AIOs, right? At first, Carina seemed to have a hard time getting to her toes with them, but it worked itself out over time. She's definitely more limber in a disposable diaper or if we let her do a little "naked baby time" on the floor.

Wow! They sure grow fast, don't they!!!! We are so happy that you all are doing well! Andrew will be 18 months next Saturday. (Scary, b/c he will be 22 months when the new one is here - and each month he grows means it's closer! AAAACCCKKK!)

Thanks so much for sharing!!!