When Elias was tiny, the weather was really hot, so he just slept in a t-shirt with a light blanket over him. Once he got active enough that he kicked the blanket off, he graduated to a t-shirt and pants. Now this week in Missouri we got the after-effects of Hurricane Gustav, which brought a lot of rain and much cooler nights. So Elias has started sleeping in bonafide pajamas, and he is SO CUTE!!! For his first night in pajamas, he slept in some St. Louis Cardinals pajamas that our friend Tanya brought him when she came to visit a couple weeks ago. (She said now that he's a Missouri boy, he had to root for the Cards!) I couldn't decide which of these pictures I thought was cuter, so I just posted them both! 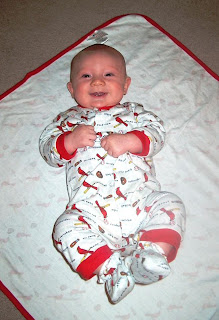 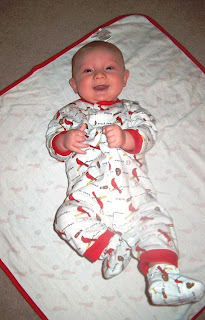 She gave him a cute set that had matching booties and a blanket, and they are all displayed here in the pictures. (I turned the blanket over so Elias wouldn't just blend in since it is the same material as his PJs.)

The change in the weather also had the unpleasant effect of giving Elias a little cold! He has had a stuffy nose and has been coughing a little bit, and the drainage has been upsetting his tummy a bit. My poor little guy! We kept him out of the nursery this morning just in case he was contagious, but he already seems better today than he did yesterday. Hopefully he's on the mend!
Posted by Joni at 9/07/2008 07:43:00 PM

Cute! Love the PJs. Looks like he loves them too!!!