See You In St. Louis! 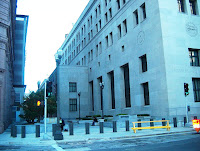 We took a short trip to St. Louis last week for Justin to go to a conference at the Federal Reserve Bank there. (See picture at right.) It was for university educators to talk about the current financial situation, and Justin had an awesome time. You can read his thoughts about it here.

While he was in the conference, Elias and I hit the town! I had never been to St. Louis before, so although we only had a little bit of time, we tried to hit the major sights. The most obvious of these, of course, is the Gateway Arch. 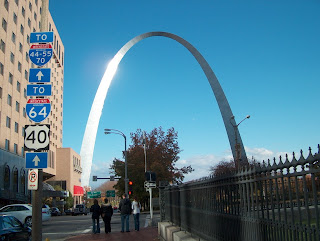 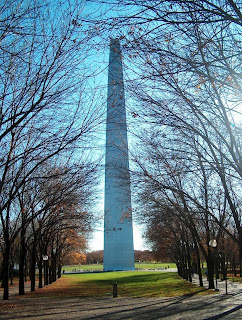 It was actually more impressive than I expected it to be - According to the sign, it is the tallest man-made monument in the US. Gleaming in the sun, it was quite a beautiful sight. Elias was also very impressed: 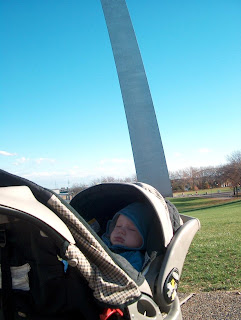 In case you can't tell in the picture, he's sleeping. We didn't go to the museum underneath because I would've had to take him out of his carseat in order to pass security, and I didn't want to wake him up!

We also went to Union Station, but we didn't get any good pictures there. Here is Elias eating his lunch in the food court there one day: 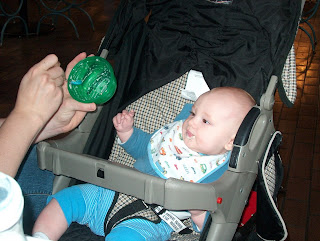 We stayed at the Holiday Inn Express, and I was very impressed at what we got for what we paid. The full breakfast bar was great, and the room was much bigger than expected. Turns out we needed that much room because we looked like we were packing for a cross-country move for our little 2-night stay in St. Louis. 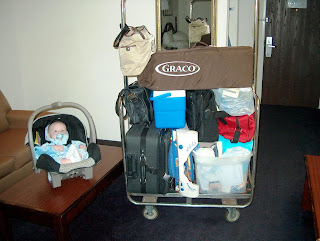 But we had everything we needed! Elias did awesome sleeping in the pack & play and being so cooperative with all the running around and sightseeing. I am so thankful for my precious, good-natured baby boy!

The only other notable thing about the trip was that Elias sat in a restaurant high chair for the first time at a Steak N Shake on our way home. What a big boy! 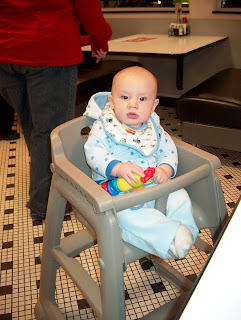 Did they give Elias one of those hats at Steak n Shake? Carina sat in a restaurant high chair for only the second time this Saturday at Steak n Shake. Thanks for reminding me to get pictures of her off my phone sitting in it wearing the hat.

How sweet! I'm glad you had a good time traveling and seeing the sights.

The museum at the arch is pretty cool, too. Someday you'll have to go.