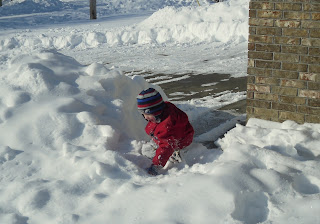 At the beginning of February, we had an official blizzard that dumped 18+ inches of snow on us!  I've never in my life seen that much snow.  (See Justin's blog coverage of the event here and here.)  Elias was fairly oblivious to most of it, although we all got pretty tired of being stuck in the house after a few days!  We did try to go out and play in the snow on the fourth day after it fell, but Elias didn't like it so much.  The snow was too powdery to build a snowman, which disappointed him gravely.  Then he couldn't throw snowballs either, so when he threw it in the air, the wind just blew all that powdery snow back into his face!  Combine that with the fact that it was too deep for him to walk in, and it just wasn't much fun. 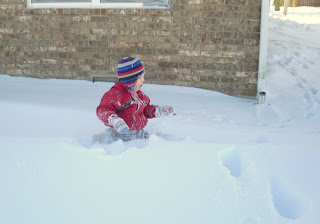 In this video, you can see the progression.  Fun the first few minutes, then he discovered he couldn't walk because he kept falling down and landing on his face.  So at the end you'll hear him start to cry and say "In the snow, please!"  I think he meant, "Out of the snow, please!"

It turns out that Elias would rather be standing NEXT TO the snow and just playing in it with his hands rather than standing IN the snow.  Lesson learned.  All future snow romps have been on the shoveled driveway and were great successes!
Posted by Joni at 2/16/2011 08:01:00 PM

I'm kind of with Elias. I'm not much for playing in the snow, either. You'll be glad you have this video, though. :-)