King's Island is an amusement park in the Cincinnati area that we went to often when I was growing up. I've only been there once since I graduated college, and it was weird this time to be going back and taking my kid to ride on the rides I can remember riding with my parents when I was small! We did go to King's Island last summer when we visited, but Elias was too small to ride much, and he spent most of the day in his stroller. This year, though, he had fun and we were able to ride more.

The biggest hit, of course, was the big park train. It was a blue "steam" engine just like Thomas! 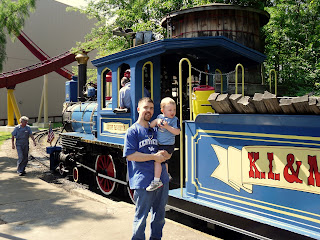 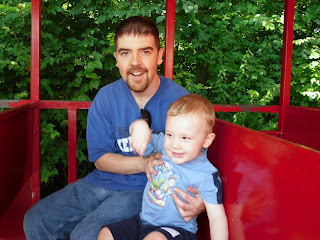 We rode this first, and of course Elias loved it!

Then we went to the kiddie land and rode a helicopter ride, which he also loved. 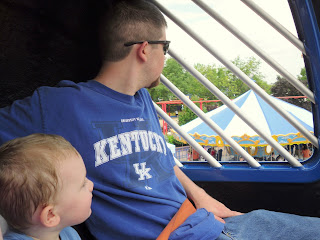 We couldn't BELIEVE how long the wait was for this ride - 30 minutes! That was rough trying to explain to a 2-year-old that the bajillion other kids in line in front of us have to ride before it's our turn. He enjoyed it, though, and I'm glad we did it. Once.

Then we met up with my sister's family, and they rode the kiddie train together. 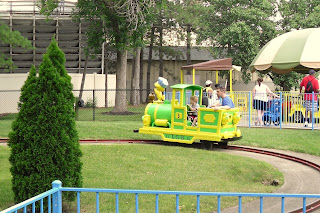 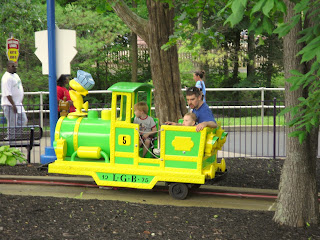 Elias loved this one so much we rode it twice! Speaking of trauma with waiting in line, though, the line wasn't long for this one - only about 5 minutes. But Elias SCREAMED in line for this one because you had to walk through a little "station" that blocked his view of the trains. He was ok as long as he could watch the train, although he was still pretty impatient to ride it, but if the trains left his line of sight, it was major trauma. What a silly boy!!!

Then it was almost time for lunch, so we went to my sister's house to eat, and Elias laid down for his nap. Justin was kind enough to volunteer to stay with Elias, and I went back to the park and met up with my mom, and we spent the afternoon together riding grown-up rides! That was fun, too! Special times with family!
Posted by Joni at 7/10/2010 07:46:00 PM

I was sorry I wasn't able to be there for the train rides with you guys. Glad to see the pictures so I can enjoy it through your blog. You're just gonna have to come back!!