The Newport Aquarium is only a short drive from where my family lives, and that was the special event we chose to do on the day when Dad was off work, so even he could come! It was fun and special to be able to share it with the whole family! When you first go in, they take a group picture that you can then purchase, and ours were so good that Mom couldn't resist buying them! (Click to enlarge.) 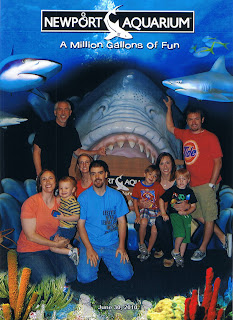 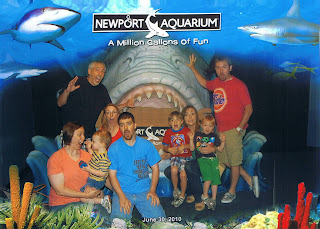 Elias liked the tunnels where you were walking underneath the aquariums and you could watch the fish swim over and around you. Those were COOL! 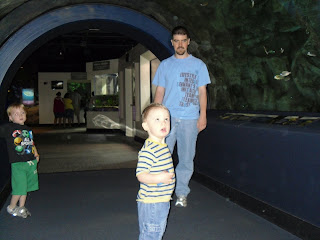 He got a little fussy after a while because he wanted to be able to run amok, and I wanted him to stay with us! So then we got him settled in his stroller with Cheerios and Thomas, and all was well again.
Watching a shark swim by 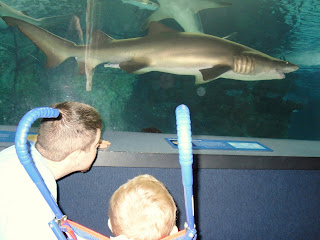 In the jellyfish room 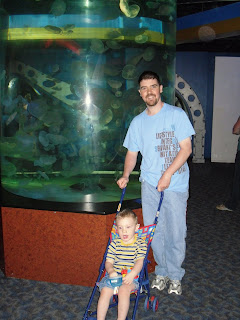 They also had a children's activity room with hands-on activities and a playground. Here are Patriot, Azlan, and Elias all playing Frogger together! 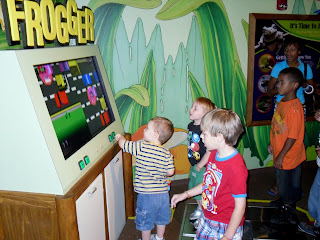 They also had a room where you could actually pet some small sharks! 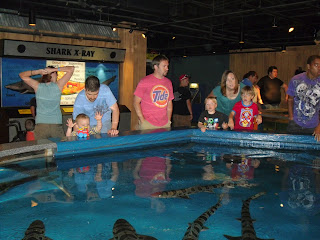 Elias was more interested in splashing the water that was on the ledge than trying to put his arm in and feel a shark. The water was too deep for the kids to be able to reach them anyway, but I was able to pet one! I thought they'd feel smooth and rubbery like a dolphin, so I was surprised when they were slimy and velvety feeling. Cool!