Big Fun in the High Chair

I am very blessed to have a child who LOVES to eat. Anything we give him so far. Although I'm slightly nervous about how MUCH he eats... Thinking ahead to his teenage years makes me want to run and hide. I mean, if he eats this much NOW... In the meantime, though, we have fun during meals. Eating is not the only thing we do in the high chair, not by a long shot. Although he still isn't feeding himself, he does like to get his hands in the food and play with it. 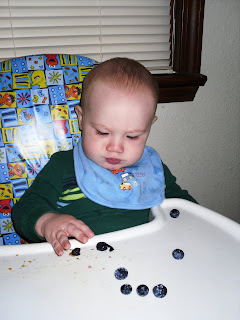 He loves blueberries, not only to eat, but also to squish! I never knew blueberries could be such a messy food until this child! All up and down his arms. But he's having fun and eating healthy food - I don't complain! 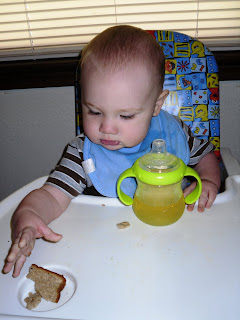 His high chair has a little cup holder in it which his sippy cup doesn't fit into. So he likes to put his food down in it... To me, it's almost like he's cleaning up! I'll encourage that!

I also took a video a couple days ago while he was eating just to show the big fun we have during meals. Notice in the video:
-He just laughs and laughs at whatever I say or do. In this particular case, I think I was just saying "Hoo, hoo, hoo." For some reason, he just thought that was hilarious. Listen for the grunt noise he makes after he's done laughing. That means "Do it again!"
-He likes to drop food on the floor and then lean over to look at it. We're working on not dropping food on purpose (now he only does it when he's done eating and doesn't want to eat what's left), but he still likes to lean over the side and see what he can see down there. If I haven't vacuumed in a few days, he's likely to see a lot. *sigh*
-He loves to breathe heavily through his nose, thinks that's just really funny.
-He laughs like a billy goat.

Other fun things he does in the high chair that aren't pictured here:
-Leaning his head far to the side and smiling up at me SO CUTE!
-Sticking out his tongue and panting like a dog.

Elias is growing up so fast! And is so silly!!! I can't wait to see you guys this week.