We're Not in Kansas... But We're Close

We had a VERY interesting day in Southwest Missouri today. Being in Tornado Alley, severe weather is very common in these parts with a storm that could produce tornados happening at least once every few weeks. Today happened to be one of those days here for us.

It started for me when Justin woke me up this morning by coming into our room with the baby in hand and saying, "We have some tornados coming our way, so I thought it would be safer to play in here." (Our master bath is the safest place in the house and where we shelter in case of emergency.) Um, not a nice thing to wake up to! We stayed in our room for a few minutes, listening to weather broadcasts on Justin's shortwave radio. It seemed like the brunt of the storm was south of us and had passed, so we finished playtime in the living room and then put Elias to bed for his morning nap. About 15 minutes later, our power went out, which we thought was strange since the storm was passed. Then on the radio, we heard "A tornado is in Bolivar." Um, what? They hadn't blown the storm sirens yet, so we weren't sure if it was true or not... And then the siren blew. Still, though, that doesn't necessarily mean that we were in imminent danger, and we were reluctant to wake up the baby if we didn't have to. So Justin peeked out the window to see what was going on, and he watched a tree blow over in a neighbor's yard across the street. Yeah, time to get the baby. Our protocol for storms is that I get the baby and take shelter while Justin keeps an eye on the TV or radio, and then he'll join us if it seems like he needs to. So I'm sitting on the bathroom floor with a baby who's pretty startled at having been yanked out of bed and then sitting in the pitch dark with me. (Room with no windows + power outage = pitch dark.) I sang hymns and praise songs to keep both him and myself calm, and thankfully, he didn't get scared or fuss at all. He was just interested in playing. (Side note: I'm thankful that I had just cleaned the toilet yesterday because he had lots of fun banging on the lid like a drum!) We were in there probably 15 minutes or so before Justin came and gave us the all-clear, but it turns out there had been a funnel cloud spotted less than a mile from our house. From what I understand, it never touched down, but it caused plenty of wind damage.

It was also raining REALLY hard, and I knew that we had a flash flood warning... I never knew really what that meant until today. I mean, seriously, a flash flood is pretty intense! There was SO much water and noplace for it to go! Our street, which slopes downhill at our end, turned into this rushing river, and our entire yard was a lake! Justin went on the front porch and snapped this picture of the corner where our street ends - on the right-hand side, that's the corner of the street under all that water! 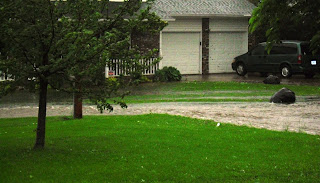 Our neighbor who lives in that house had a huge river rushing through his yard, which you can see going off to the left! Also note the black garbage bag in his yard - Friday is garbage day for us, so somebody down the street had already set theirs out, and it floated down the street into his yard! The force of the water actually knocked out our neighbor's entire back fence in its fury. Justin took this picture from our back porch: 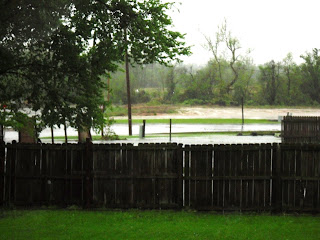 The fence in front is the one that separates our yard from our neighbors, and then the fence in back is what used to separate his backyard from the street behind. That fence used to go all the way across the picture - now it ends on the right side and nothing but emptiness for the rest of the shot. He has a smaller white picket fence in the front of his yard, and that got wiped out too. You can also see all the standing water in the background of the picture. It was unreal.

So that was our excitement in the morning. I am SO THANKFUL Justin was able to be here with us the whole time - I would've been SO SCARED home alone with Elias. The storm was really only the first hour of our day, but its effects lasted all day because our power was out for about 6.5 hours. That really wasn't so bad besides the fact that I couldn't do anything I had planned on doing for the day... I didn't realize how much of my life is dependent on electricity! Couldn't do laundry or run the dishwasher. Couldn't eat the leftovers I had planned on for lunch since I couldn't reheat them, and Elias had to eat his lunch cold too, which I'm thankful he didn't mind. So I took a nap and read a book. Actually, it was pretty nice... :) But our power came back on in the afternoon, and life has returned to normal now.

Remind me to never live there!! I was getting nervous reading your post! Wind storms and tornado warnings are the thing I'm the most afraid of! I got Noah up out of his nap once b/c it was so windy out and I turned on the TV and saw their DUCK message with a tornado spinning behind it. I didn't wait long enough to realize they were saying, "IF you are in a situation... you should get Down Under C.. K..." I can't remember what all the letters stand for so I guess the acronym was lost on me. Anyway, I know I over react, but I get so scared!

So glad that you all are okay!!!