After we did the bouncy houses, we went to our favorite local restaurant for dinner. We chose that one because Elias can get his absolute favorite food there: macaroni & cheese! Another family met us there, and we enjoyed dinner and birthday cake with our friends!
Elias with his birthday balloons: 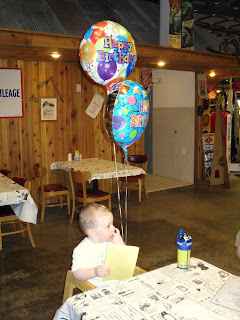 In this picture, he's also holding a birthday card that one of his older friends made for him! Solomon is 5, and he made the cutest card for Elias! They both like Thomas and they watch Thomas movies together, so Sol put Thomas stickers in the card. Elias LOVED it, and he still carries it around and looks at it!

After dinner, we had birthday cake - a really cool Thomas & Friends cake I got from Wal-Mart! But being the terrific birthday mommy that I am, I forgot to get a picture of it. I googled it, though, and found a picture of the design online. So imagine this with "Happy Birthday Elias" written on the green space between the tracks! 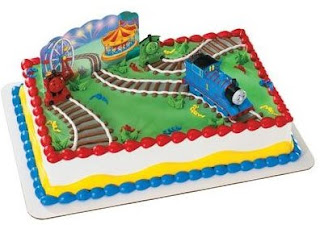 We lit a #2 candle and sang happy birthday, but Elias had no idea what to do. Some of his friends that were there, though, were a little older, and they were happy to help with blowing out the candle. Elias just grabbed the Thomas toy off the cake! 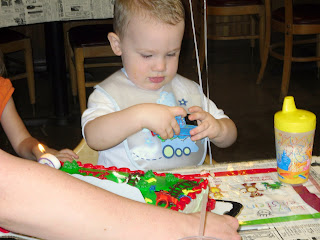 This picture cracks me up... He's looking at Mya like "Don't even think about touching my Thomas." 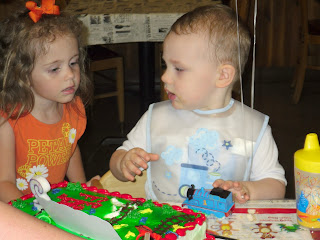 Grabbing the toy off the cake, though, meant that he got frosting all over his hands. 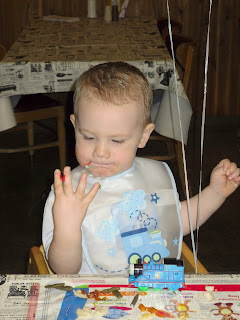 He didn't mind that a whole lot, although he wasn't really interested in licking it off. He was incredibly upset, though, that Thomas had frosting all over him, and there was a bit of a meltdown until we got Thomas cleaned off! 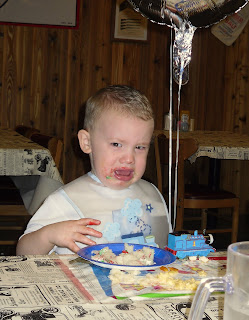 Then I gave Elias a piece of cake, which he had absolutely no interest in eating. He took one bite, gagged on it, and didn't touch the rest. Oh well. I'm not going to complain if my kid doesn't have his mama's sweet tooth! So he just enjoyed playing with his Thomas while the rest of us ate cake. I think the frosting-face is still pretty cute, though! 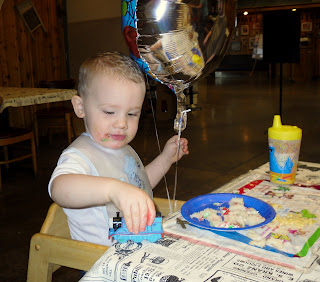