Elias slept for 11.5 hours last night! In fact, I had to wake him up for breakfast! I know he needs more sleep, but I want him to stay on schedule and hopefully nap this afternoon... My big, big, big boy! I snuck in to check on him last night after he fell asleep - I wanted to make sure he was ok. He was sound asleep, and I took a picture of his position because it made me laugh. 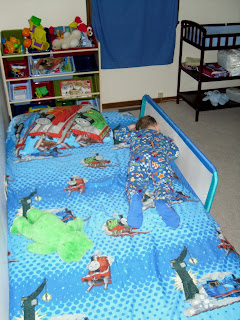 He had his face all smooshed into the mesh of the rail! I actually anticipated this because he always slept with his face pressed into the bars of his crib. I was actually worried about moving into the bed because he wouldn't have as much to smoosh into - didn't seem to stop him, though! You'll also notice that he has his hand in his hair - he rubs his hair to put himself to sleep.

We never heard a peep out of him all night long. I woke up about 4:30 and decided to check the video monitor and make sure he was ok... But I didn't see him in the bed... So I went into his room, and he had thrown his pillow on the floor between the bed and toy shelf, and he was sleeping on the pillow on the floor! I wonder if that just happened or if he did it on purpose because he missed the enclosed feeling. I just left him where he was, but a few minutes later I heard movement and so I checked the monitor again. He stood up, looked around dazedly, and then stumbled around and climbed into bed where he promptly fell right back asleep! He stayed there until I woke him up at 7:10.

*Note: I could have cropped this picture closer, but I left it big on purpose. My mother-in-law bought that toy shelf for us back in January, and I've been promising to show her a picture of what it looks like in his room ever since then. But the slacker I am, I haven't done it! So this is for you, JoBeth! We love the toy shelf!!! Thank you!!!
Posted by Joni at 5/01/2010 10:15:00 AM