We had Elias' birthday party yesterday! For the first part of it we got together with some friends at the local bouncy house place where kids of all ages can jump their hearts out. We had a great time, and Elias had fun with his friends! 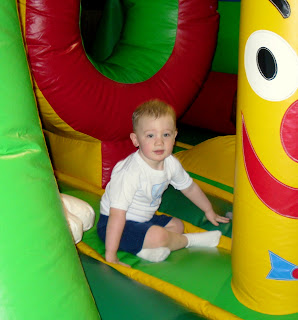 When we first got there, Elias wasn't so sure about the jumping business. We had been to a place like this once before (See that post here.), but it was a while ago and he must've forgotten. So for the first 30 minutes or so, he didn't want to jump on his feet, he preferred to sit and bounce on his bottom. Maybe he was scared of falling down? Here he is bouncing while his friend Cooper jumps circles around him!

We had to wake him up from his nap in order to get there on time, and for a little while, I wasn't sure if he was going to ever wake up and enjoy himself. At one point he was just laying down in the bouncy house! 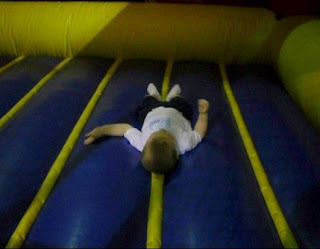 He also enjoyed hanging onto an inflatable tree in the toddler section, which was pretty low-key. His friend Miles is in the background. 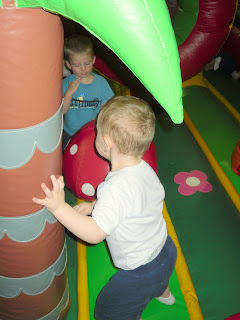 But he finally got his second wind, and then he was a madman! Here he is jumping with his friends Tessa and Andrew: 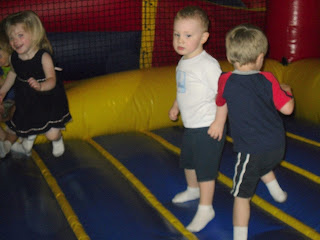 And a video of him just running in circles!

In the toddler section, there was a little slide that he really enjoyed, but it was hard lifting him up there to the top of it since he didn't know how to climb it! He watched the older kids doing it, and he figured out how to climb it himself! I'm so proud of that big boy!