Elias and I also spent a couple days in Cincinnati with my family, and I barely took any photos while we were there...  I guess we were just having too much fun!  We did visit a place called EnterTRAINment Junction, which is a huge hands-on train-themed center for families.  Whoa!  Elias' dream!  There was a HUGE walk-through model train setup that, once again, Elias enjoyed watching the trains go around, and especially over bridges and through tunnels.  They also had a large play center for the little kids, and we spent quite a while in there.  They had a big play train the kids could climb in, and Elias loved being able to get so close to it. 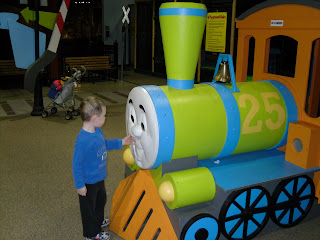 Really close to it! 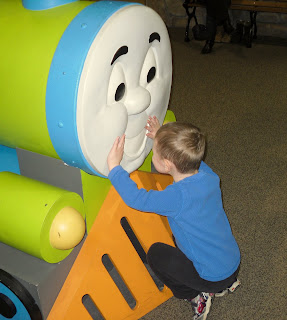 They also had a little kid-controlled Thomas display like the one in Paducah, but Elias had a hard time with the concept that you had to press and HOLD the button to keep Thomas moving.  He just wanted to push it once and have Thomas keep going.  I still had to literally drag him away from this, kicking and screaming, to go eat lunch. 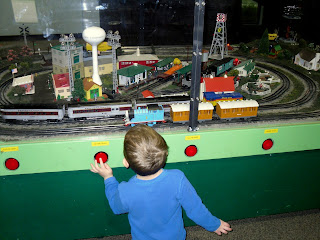 Other than that, I don't have many other mementos of our visit.  My sister and her family also came in from Atlanta, so it was neat for Elias to be able to play with his cousins.  They weren't exceptionally cooperative, though, when we told them to all sit on the bench and smile for a picture when we were waiting for a table at dinnertime. 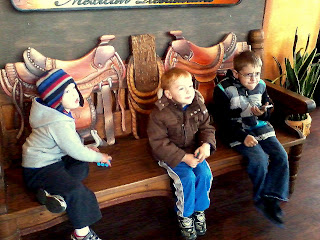 Ah well, at least they are all sitting together!

There was a HILARIOUS moment when we were all in the car together.  The only way we could all fit was to put the two littlest boys in the far back in their boosters - an adult couldn't fit back there.  So Elias and Azlan were back there together, which went fine.  Azlan was playing a game on his mom's iPhone - I don't know what he was playing, but Elias thought it was HILARIOUS!!!  I had to capture the moment as best I could from the front seat:

I apologized to my sister because Elias was all up in her son's space, and she said it was probably a good lesson for Azlan to be on the receiving end, since he does the same thing to Patriot all the time.  Ha!  Glad to be of service.

For some reason, I just watched this video for the first time. So funny!

Remember when families used to talk to each other when they rode in the car? That was back when we used to be able to see each other's eyes occasionally, too. Yeah, those were good times ...