This weekend we visited Fieth Family Farm, just a few miles down the highway.  We were wanting to visit some kind of autumn-activity place like a pumpkin patch or something, and we found this was the closest place.  This was their opening weekend, and we were very surprised to be the only people there for the whole 2 hours we spent there on Saturday morning!  Well, at least we didn't have to wait in any lines!

We got there just after they opened, so they were still getting everything set up.  We explored the tent with displays of pumpkins and gourds, and a straw horse that Elias refused to sit on!
Then outside the tent they had a little tunnel made of corn stalks that Elias had a great time running through over and over again! 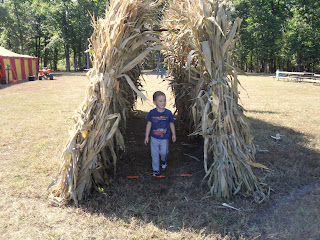 Then we explored a small maze of hay bales.
Then we checked out the pigs!
Apparently there were also supposed to be calves in the petting zoo, but they were on the wrong side of the farm and hadn't been brought over for the display yet.  Ah well. 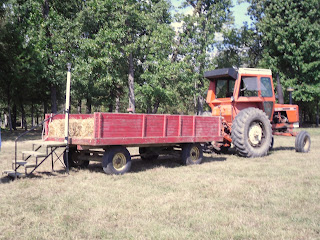 Then the farmer drove in the tractor for the hayride, and Elias was VERY excited to get on it!  We were even accompanied on our ride by the farm dog, Duke, which Elias thought was great. 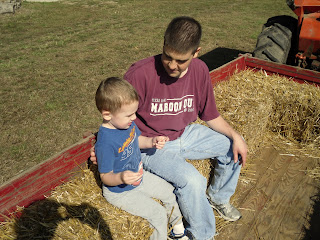 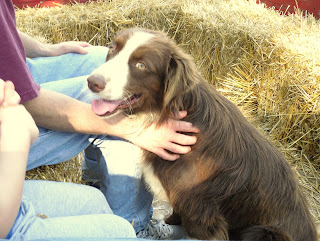 In my mind, I hadn't intended on us trying to do the corn maze with Elias, but apparently that's what the hayride was for - to take you to the entrance of the maze.  So he dropped us off there, and so... uh... I guess we'll do the maze!  Thankfully the lady in the tent had mentioned that you should take all right turns in the maze, so we didn't have much trouble finding our way out.  It was a LONG maze, though, so Elias pooped out, but Justin and I took turns carrying him piggyback, and we got there. 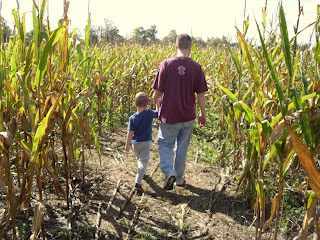 What an adventure!  It was the first corn maze for any of us, and I guess that's one thing I can cross of my list of things I've never done!

After enjoying the hayride back, again with Duke, we pulled out our snacks and enjoyed relaxing in the shade of some trees.  As we were sitting there, we saw a couple pickup trucks pull up and empty big tubs of corn into some bins.  We had no idea what they were doing, so we went to check it out, and it turns out that they have cornboxes for kids to play in - like a sandbox, but filled with corn!  Elias LOOOOOOVED this! 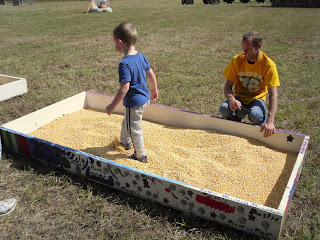 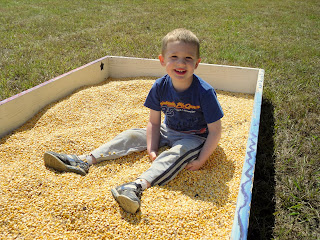 The only way we could get Elias out of the cornbox was by telling him it was time to ride the train!  We thought it was nice of them to fire up the train ride just for us!  So that took them on a nice tour of the backwoods of the farm, while I enjoyed chatting with the farmer. 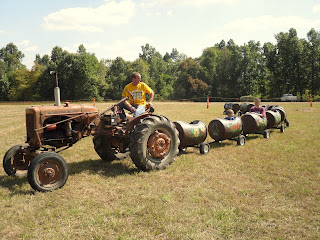 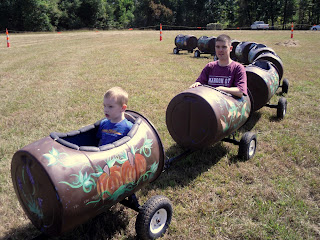 Finally, Elias enjoyed one more romp in the cornbox before we called it a day.  Fun fall farm adventures in rural Missouri! 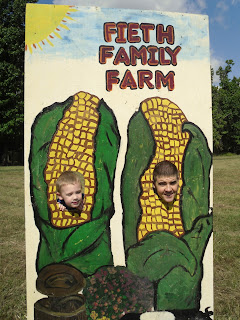