We have had a great time over the summer going to the park and playing in the nice weather. I never take my camera with us, but I can take pictures on my phone. But I forgot that I've been taking pictures of Elias playing at the park this summer, and I recently just found them on my phone! So here's a random mix of Elias playing at two different parks here in our town. Now that the weather is cooling off a bit, it's perfect to go play at the park, so we're going to enjoy it while we can!! 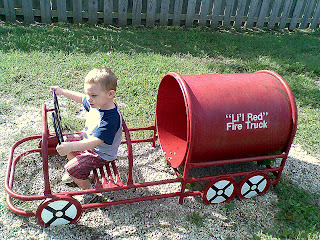 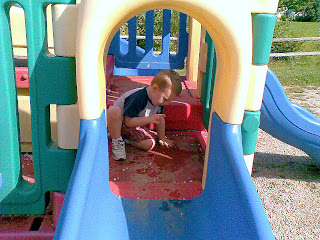 One morning when we went to the park, the playground equipment was still wet from the dew, and there were puddles on it. Elias had a great time splashing in them!

I left the end part of him walking away so you could see how wet his bottom was from sitting in the puddle before he went down the slide! Oh well. It didn't slow him down any! And what's a playground for if not to get messy and have fun?!?!

His hands-down favorite park activity is still swinging. However, this summer he also discovered the merry-go-round, which he also loves! I have tried and tried to get a good video of him laughing and enjoying it, but he always completely freezes up when he sees the camera. What a goof. This is the best I got. This was at the beginning of the summer before they oiled the merry-go-round, so try to ignore the squeaks!

You may also note that in both videos, the first thing he says when he realizes he's being filmed is "Good morning!" I have no idea why he does this. I think it must be something Justin taught him... 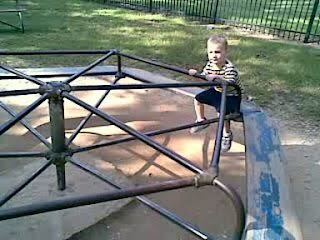 Yeah, doesn't he look like he's having a great time on the merry-go-round. Woo hoo.

In August he got his first playground injury. Nothing major - just fell and scraped his knee on the rocks. But I had to document it for posterity's sake! 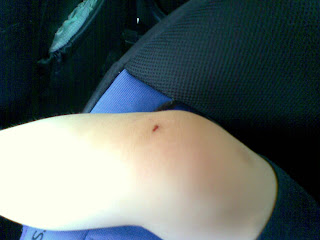 So much fun at the playground. And so what if you get a little dirty. It washes off!
Thanks for the pictures and the videos.
Hugs to all!!