Last weekend we took a whirlwind trip to spend Labor Day weekend with Grandpa & Grandma. They drove in from Cincinnati, and we drove in from Bolivar, and we had a great time for a couple days together! We stayed in a 2-bedroom suite at a hotel, and it worked out great with our own bedrooms plus a full kitchen and living area. Elias did great, and I'm so thankful for that!

On Saturday we went to the St. Louis Children's Museum, the Magic House. It was really cool, although I think it would've been more fun if Elias was just a little bit older. We did have a good time, though, and it was fun to play together. Here is Elias going down the slide at the indoor playground: 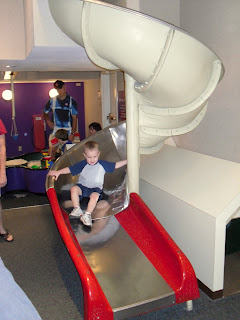 This was a set of pipes that you were supposed to flop the shoe over the mouth to hear the different tones that each one made. Elias didn't get it, but at least he tried! 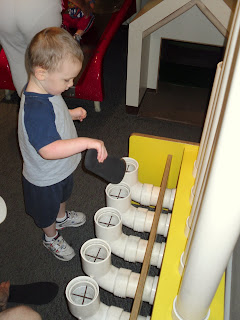 They had a neat water play section that Elias enjoyed. 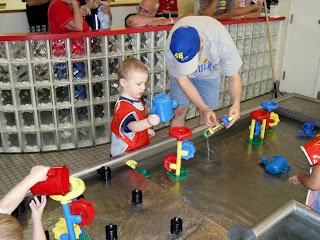 I thought it was so cool that they had the aprons you could put on to keep your kid from getting totally soaked. Of course, he got soaked anyway, but I only had to change his shirt instead of his entire outfit. Go apron!


Then on Sunday we went to the St. Louis Zoo, which is totally awesome! It's neat because it's free to get in, then you can pay extra for some special attractions. The general theme of that visit is that Elias had a lot of fun, but didn't give a hoot about the animals. Here he is playing in the toy Jeep in the middle of a huge display of reptiles and small mammals. (We said it was like Diego's Jeep that he rescues animals in, and he thought that was cool.) 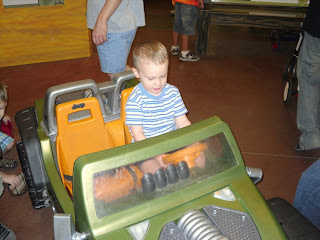 Here he is playing with the rocks on the ground instead of petting goats. 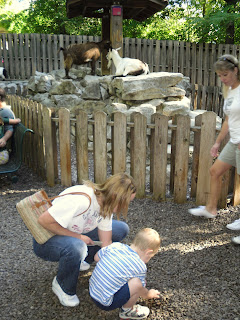 (Note: When your child digs down below the rocks and starts playing with the "dirt" underneath, that's not dirt down there. Very glad for the hand-washing station they had outside!)
Here he is playing with his toy train instead of looking at the ring-tailed lemurs. 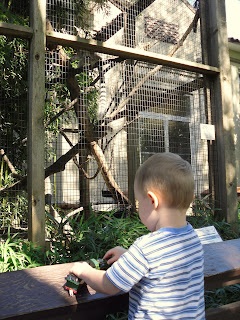 Sigh. The one thing he, of course, really enjoyed was the zoo train. 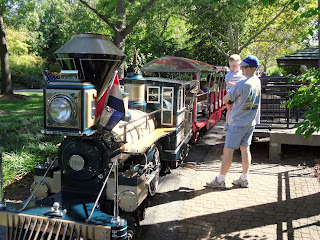 This train was really cool because there were 4 different stops around the zoo, and you could get off to look at the animals at each stop, and then get back on all for the price of one ticket. Very very cool. So here are Daddy and Elias with Grandma and Grandpa behind them. What a great picture! 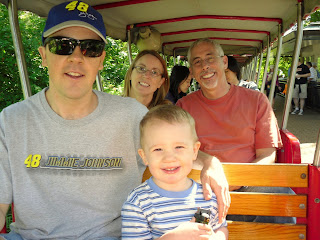 Finally, the post I've been waiting for! Cracking up at all the animals he didn't look at ... your goofy kid.

We had a great time, too, and look forward to doing it again!! Thanks for a fun weekend!