Alrighty, here's another Pinterest recipe that I loved and my guys didn't.  I guess I don't do a good job of picking out recipes for the whole family's taste buds instead of just my own!  The issue is, though, that neither of my guys like the texture of chicken cooked in the crockpot.  So next time I'll try the same recipe cooked on the stovetop, and I bet they'll like it better.  For those of you whose families like crockpot meals, though, I highly recommend this.  The flavor was fantastic, and it was pretty simple.  :)  Pin here, recipe here.  Below is my photo and the original recipe. 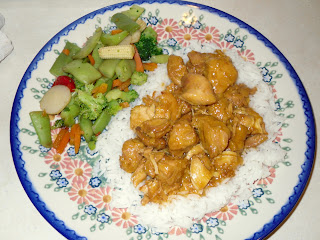 
In a bowl, mix the orange juice, brown sugar, vinegar, salt, and ketchup. Pour the flour in a small bowl.  Cover the chicken breast chunks in flour and shake off the excess.  Pour a small amount of olive oil in a skillet and brown the flour-covered chicken.  The chicken doesn't need to be fully cooked since it's going in the crock pot. After the chicken is done cooking, pour the pieces into the crock pot.  Then cover the chicken with your sauce mixture and give the pot a stir.  Cook on low for 5-6 hours or on high for 2-3.Serve over rice and even add veggies if you want a healthier meal.  Enjoy!

It's a little irritating that the recipe doesn't tell you how much chicken to use!  I used 6 chicken breasts, and I thought the sauce-meat ratio was good.  It would've been fine with less chicken, though, for those of you who don't want a lot of leftovers!  Since I used that much chicken, I actually had some trouble browning it because the pan I used was too small.  So make sure to use a large enough saute pan to brown your chicken, or do it in batches - I think it would've been better if I had been able to more thoroughly brown the chicken.

I don't think this was very much like Panda Express Orange Chicken, which is of course fabulous.  However, that chicken is deep fried, which I'm sure is why it's so good!  My much healthier orange chicken was just different, but also very tasty.  It was definitely very orange-y and very sweet.  Not a hint of spice in it.

I served it with jasmine rice lightly flavored with garlic and ginger, and a freezer bag of stir fry vegetables lightly seasoned with soy sauce.  The salty vegetables were a nice contrast with the sweet chicken.  Let me know if you try this!

I have been looking for an orange chicken recipe...I will be trying this one! Thanks!