My baby boy turned 8 months old today! He is developing and growing so fast, and we are so proud of him! He continues to be the light of our lives. 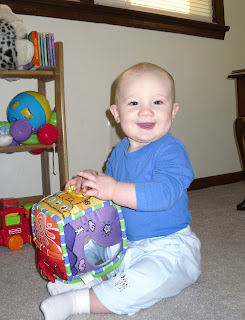 He is so big! We had our church small group last night, and in conversation, we determined that Elias outweighs all the other babies by at least 3 or 4 pounds, even the ones who are older than him! I was just guessing about his weight, though, since we hadn't weighed him since his 6 month appointment. So out of curiosity, I weighed him with me on the scale today, and he was 22 pounds! That was fully clothed and just after a meal, but it still lets us know approximately how heavy he is. (I was guessing 21.) He is just growing so fast, and he continues to be very healthy, for which we are VERY thankful!

He is eating like crazy and loving solid foods. Now that he's 8 months old, we get to start fun proteins like chicken and yogurt, so stay tuned for those developments! We did try some puffs today, and he was pretty freaked out at first, but he did eat them. The first time we tried them, at lunch, he would just hold it in his mouth and make the funniest grimaces! I kept trying to tell him they were good, but he wasn't so sure. We tried them again at dinner, though, and by the 4th or 5th puff, he was crunching them and enjoying himself. 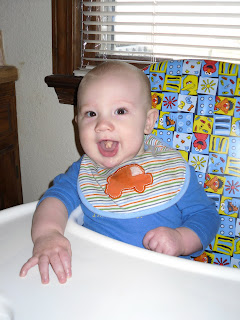 So yay! He's not remotely close to actually feeding them to himself, though. I would put some on the tray and he would grab one in each hand and just hold them while I fed him the rest. Ah well, slowly but surely.

Speaking of funny faces, he is getting so expressive! He's started making a funny fishy face, which I just captured a tiny bit of in this picture. 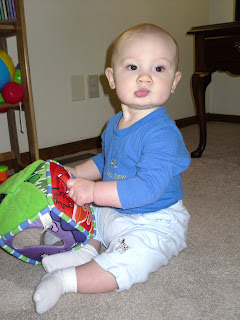 Even funnier, though, he has started to scrunch up his face and huff through his nose. I'll post a video of that later this week, but here's a picture of what the face looks like. 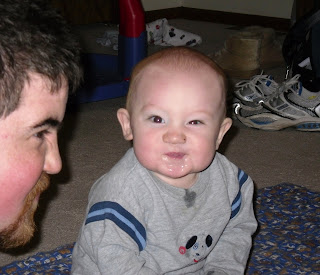 He'll even do it in response to us... You can see Daddy egging him on in the above photo. So funny!

He's getting so smart in playing with his toys! He reaches, grabs, shakes, pushes, pulls, and figures things out! 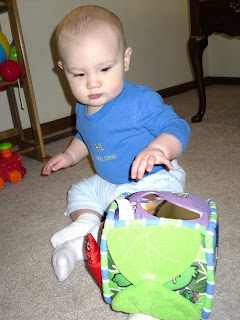 He has a little train that will light up, play music, and move when a button is pushed. Well, he has figured out how to push the button, and then when it plays he messes with the moving parts trying to figure out how and why they move. 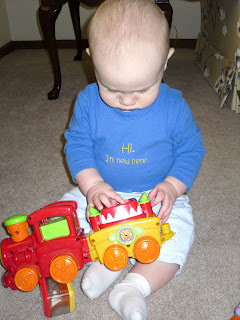 When one of his moving toys is moving near him, he'll flip it over and pick it up to watch the wheels turn or the legs move, trying to figure it out. For Christmas he got the cutest Winne the Pooh that crawls, and I'll have to get a video of what he does when poor Winnie tries to crawl past! Let's just say that Winnie definitely does not reach any destination besides Elias!

So we continue to be so proud of our precious boy and thankful for him. He's growing and learning, and every day is a new adventure of discoveries!
Posted by Joni at 1/21/2009 11:52:00 PM

Thanks so much for all the great pictures and stories. I miss you guys and these really help us to keep up. Give Elias hugs and kisses from Grandma.