For this week's edition of Works For Me Wednesday, I just wanted to share about how using cloth diapers and wipes is working for us. They're working awesome! Many of my long-time readers will know that we decided to go cloth before Elias was born, and we have been using the same diapers since he was a month old! (Although the diapers said they fit a 7 lb baby, and Elias was 9.5 lbs at birth, they were just too big for him at first, especially before he lost his umbilical cord.) So we've been using the same diapers for the past 9 months, and they're still going strong!

One note, though: Elias is a very heavy wetter, and so we have had a few problems with leaks. We learned to make sure that he's pointed down, which helps from leaking out the top of the diaper. But we've ended up just using Huggies Overnites disposables at night because we hated our baby boy waking up in a puddle!

We use the bumGenius 3.0 one size diapers which are adjustable to grow with y

our baby. So theoretically, they are the only diapers you should need to buy ever. However, Elias is already in the largest setting, and I'm doubting he'll be able to wear them for another two years... We'll cross that bridge when we get there. We have about 30 diapers, which is enough for us to go 4-5 days between washings, which is great. My friend Ashlee did a post a few weeks ago about washing cloth diapers, and it's almost exactly how I do it. So I thought I'd just link her post for you to read if you're interested in how washing diapers works!

So instead of posting the same thing Ashlee did, I just thought I'd add to it by saying that once you've gone cloth with diapers, it is a BREEZE to go cloth for your wipes too. I bought all our cloth wipes used on diaperswappers.com (LOVE this site! I also bought diaper bags, pail liners, and mama cloth on this site too.), and I got about 40 for only about $5. To go even cheaper and easier than that, just buy some flannel, fleece, or other soft sturdy cloth, and cut it into 6x6 or 8x8 squares. You can hem them or make them two-sided if you want, but I don't think it's necessary. Then I just fold them in half and put them in a normal wipes tub. 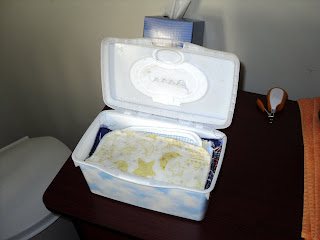 We got this tub of wipes as a baby shower gift, and we used them up when Elias was tiny before he graduated to cloth diapers. So I just saved the tub to be used in this way.

Then I make a wipe solution:

2 cups hot water
2 tbsp food grade oil (I use canola just because that's what we have.)
2 tbsp baby shampoo

Put the above in a jar and swirl it together until well-mixed. (Don't shake it or else it will get all foamy! Not that I know from personal experience...) Then just pour over your wipes and press them down so they soak up the solution. Done! 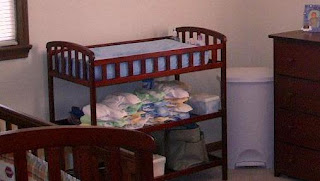 I just keep the tub on the changing table with the diapers, and throw the dirty wipes in the pail with the dirty diapers. I wash them all together, and it's easy schmeezy!

I did some figuring, and we broke even on our diapers at about 9 months, meaning that what we paid for our diapers is about what we would've paid for disposables for that length of time. (This is assuming we had paid for all our diapers. My amazing in-laws actually gave us half our stash, so the investment that we ourselves put into it was reached at about 5 months!) We bought one of the most expensive diapers on the market, but we thought of it more as an investment, considering not only price, but also ease of use, practicality, and consumer reviews. And from here on out, any more length of time that we get to use these diapers, that's just more money we're SAVING by not buying disposables! Plus, should we ever have another child, we'll keep these diapers to use on him/her, and that will mean MAJOR savings in the diaper department.

I've looked at getting some cloth wipes but haven't done it yet. We got a LOT of wipes for shower gifts (like the big huge boxes) so I've only bought wipes once at home and a couple of times when we traveled, which I would have had to do anyway. Then Monday I bought 320 wipes for $1.50. But I think I might have to check into it, especially if we have another kid. I wondered what we'd put on the wipes so thanks for sharing!

PS. My WFMW post is listed right after yours on the wearethatfamily site :)

I loved CD'ing both my kids and posted about for WFMW a month or so ago. We also used cloth wipes, but I kept my wipes dry and used a squirt bottle to wet them each individual time.

For night time, a CPF + hemp doubler + (Aristocrats) wool cover worked for us with ds who was also a heavy wetter. Just a thought.

I also use CD and find it so much easier to use cloth wipes too. It was a pain to seperate out the dirty wipe from the diaper.

I love Bum Genius, too. That's what we use at night, and haven't ever had a problem. Mine came with two inserts, one long and one short and I always use them both. That may be why it works so well...

I tried cloth wipes, but never really got into it. I just wash my disposable wipes and then throw them away clean.

The best way to clean cloth diapers is to pre-rinse them off in the toilet using a Bathroom Bidet Sprayer. So convenient and if you are trying to help the environment (and your pocket book) you can give it a double whammy by virtually eliminating toilet paper use, at the same time as you benefit from using it on the diapers, by using it on yourself. I think Dr. Oz on Oprah said it best: "if you had pee or poop on your hand, you wouldn't wipe it off with paper, would you? You'd wash it off" Available at www.bathroomsprayers.com they come in an inexpensive kit and can be installed without a plumber. And after using one of these you won't know how you lasted all those years with wadded up handfuls of toilet paper. Now we're talking green and helping the environment without any pain.