For this week's edition of Works For Me Wednesday, I'm passing on an idea I first came across at Leaving Excess. (Her post was about onions, though, and mine is about peppers, so maybe that makes it sufficiently original to claim it as my own post?!)

The major issue this solved was that fresh peppers are REALLY expensive these days. For those of you who don't eat peppers, the regular price for ONE red pepper at my Wal-Mart is $1.98. SHEESH! Green peppers are about $0.98 each regular. This made it tough to save money. However, peppers will often go on sale - greens for $0.50 each and reds for about $0.79 each.

So of course you want to stock up while they're on sale, but who can use 15 fresh peppers before they go bad?! Not me. So here's the solution! You buy a bunch of fresh peppers while they're on sale, then go ahead and cut them all up however you like. I generally chop about 3/4 of my peppers in normal dices, and then I slice the rest for use in stir-frys and fajitas. Once cut, you spread them out on a cookie sheet lined with parchment/wax paper. (Depending on how many peppers you're freezing, you may need to use more than one sheet. I can fit about 4 peppers on one cookie sheet. I usually just use the same cookie sheet and freeze them in batches - it only takes them about an hour to freeze. So I bag the frozen ones and then put more fresh ones on the same sheet.) 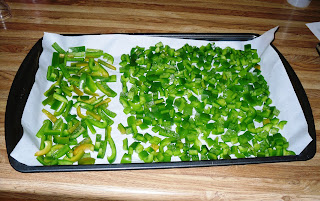 This is an important step because if you just put them directly in baggies before freezing them, they'll freeze into a solid lump and you won't be able to use just some of what's in the bag. So you spread them out in a single layer and freeze them that way first, and then once frozen you transfer them to your freezer bags. 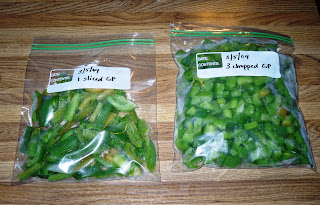 So by buying 6 red peppers on sale and freezing them, I save more than $7 than if I had bought them at full price. Geez!

Note: This will only save you money if you actually cut up and freeze the peppers before they rot! You'll notice that in my pictures above, the green peppers had sat on my counter so long they were starting to change color... But hey, I got 'em cut and frozen! Dodged a bullet there...

Not only do you save money by doing this with your peppers, but it also speeds up the cooking process because your peppers are already cut! Makes me a lot more likely to actually make the omelet for breakfast, since the peppers are already cut to put in it. You don't have to thaw them, just put however many you want directly in the pan. They cook up soft, but taste great. (Note: Once peppers are frozen, they're not very good to just eat raw - they need to be cooked.)

I love any advice on freezing products, great tips, cant wait for the city market to buzz with these items!

I've done this with berries, too... blueberries, raspberries, strawberries, which are also somewhat expensive but sometimes go on sale.

Thanks! I freeze peppers and onions and other things but I have not lined them on a pan to freeze before I bag them- thanks for the tip!

I do this with peppers and onions and find that I a) don't waste them anymore, and b) am also much more likely to make things that use them! I don't flash freeze them though, I just freeze them in small enough quantities (i.e. snack-sized baggies) that I can use the whole thing at once. We like a lot of peppers and onions so it's not really an issue for us. I might try the cookie sheet idea though!