Don't Sit Under the Apple Tree... 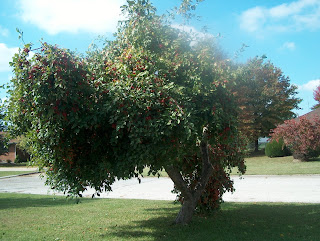 This is the tree in our front yard, some kind of crab apple. The problem is that it got so heavy with fruit that the branches started breaking! We lost three branches at different times in the year, and of course they're all the ones that face the street so anybody coming down sees how pathetic our tree is. Justin has been eating the fruit ever since we moved in, but it took me several months to get up the courage to try it. I'm just not the outdoorsy type that knows how to forage for food... But he eventually convinced me that they were yummy and the branches were NOT going to break on my head if I pulled on them. So I tried them and they were indeed yummy - sweet with a burst of tartness.

So then he had the bright idea that I could make an apple pie with them! I'm not a huge fan of pies, but I do like cobblers, so I decided that it might be fun to make a homegrown apple crisp. So I harvested a bowl full of the apples. 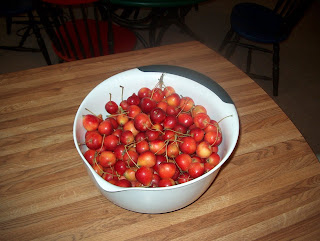 They were pretty annoying to try to get the seeds out, since I'm spoiled by being used to the corer/wedger that will core and slice them for you. Even just cutting them in quarters would leave a piece too small to be worth anything. So I cut them in half and then used my Pampered Chef Core 'N More, which worked pretty well. Then I made an Apple Oat Crisp. We ate it with some No Sugar Added vanilla ice cream. YUM!! 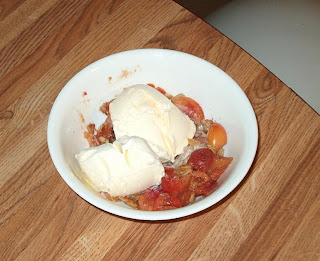 I must say I'm pretty proud of myself. Unfortunately, we had our first hard frost last night, so the apples won't be good much longer. But how many people can say they made a cobbler with apples off the tree in their front yard?! :)
Posted by Joni at 10/28/2008 04:37:00 PM

I grew some tomatoes this summer and was pretty excited to use them in salads and stuff. But I think your apple crisp is definitely more courageous.

Can you can the apples before they go bad? I don't know anything about canning, but Matt's grandmother cans food from their garden all summer long and that's about all they eat through the winter. Pretty serious, but seems like it might be fun!

Joni, you are SO Betty Crocker! I'm very impressed! I think it is time, though, for some new pics of your sweet boy...and I don't mean Justin! :)