You've seen plenty of pictures of Elias in his Kick & Play. He loves to kick and he loves to play, so this is a pretty appropriate toy for him! 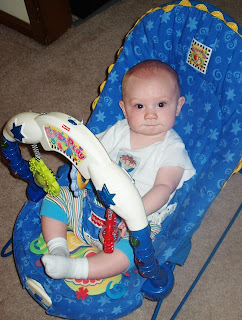 He has found yet another fun use for the Kick & Play, though - he loves to fill his diaper while sitting in it. Seriously. I'd say 18 of his last 20 dirty diapers were created while he was sitting in the Kick & Play. Because of this, it has earned the affectionate nickname of the "Kick & Poop." Justin says that he's practically potty trained already, since he mostly only fills his pants in this one place. I'm not going to go that far as to hope that he's aware of what he's doing, but I do think it's pretty funny. 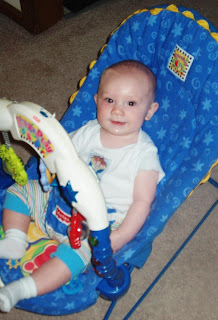 that is hilarious! and the 2nd pic with him smiling is way too cute! :)

I don't know if you remember Lil Abner cartoons... but they had something called Kickapoo Joy Juice in those comics. I suspect that what Elias is creating is somewhat as potent.

Ian poops a lot while playing in his exersaucer. Maybe it has something to with being active and sitting somewhat upright?

Probably the kicking is making things flow. Carina let one major one rip yesterday right before we left for church when we let her bounce in the Jumperoo for a while. Seriously, it was a 2-person job to change her. I'm just thankful we'd put her in a disposable diaper instead of cloth in preparation for being out and about that day!