Big Boy in the Shopping Cart!

I mentioned here that Elias is riding in the seat of shopping carts now that he has his new carseat. For the most part, he does awesome and loves riding in the carts. It's only at Walgreens that he throws a fit after he's been in the cart seat for too long... My only hypothesis is that the carts are smaller there, and so his view is lower and he doesn't like watching my belly instead of my face as we're shopping? I have no idea. Regardless, he does awesome at Wal-Mart, Aldi, and Woods, so 3 out of 4 ain't bad! I snapped some pics of him in the Walgreens cart the other day, though - before he started screaming... He was so proud of himself sitting in the cart like a big boy! 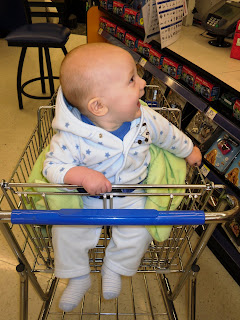 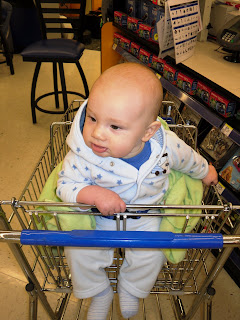 In that first picture, is he flirting with someone behind the counter? He's such a cutie!

Nope, not flirting. He was actually smiling at me like that and just turned his head right before the picture. He does flirt like that with anybody to talks to him in stores, though, which is about a million people every time we go out... :)