We did most of our Black Friday shopping online, because that's where the best deals were, and we didn't have to go out in the cold! (I did go to Wal-Mart at 5am, but just for fun - not because I wanted to get anything... I did get a couple small Christmas presents there, but I digress...) Our two big online Black Friday purchases have arrived now, and we're excited about them!

First of all, Justin's parents bought us our Christmas gift early - a new camera!

I guess they got tired of the bad pictures and video I was posting on here. I can't blame them either! So now we have a great new digital camera that takes good video too! And it's tiny and a cute red. How can you beat that?! So look forward to much better pictures and videos from now on. Props go to my husband, who got up at 4am to buy this on walmart.com. That's when the sales opened, and we knew these would be gone in a snap. But he made it on there and got it! Thanks, honey!

And then later in the day, I found a great convertible carseat on sale at babycenter.com. This is one of the ones we had been wanting to get, but it was just too expensive! But the Black Friday sale put it in our price range, and now this should last Elias until he's ready to move up to a booster seat at age 4. It's a First Years True Fit, which we chose mainly because it goes all the way up to 65 pounds (unlike most carseats, which only hold 40 pounds), and at his current rate of growth, E is going to be 40 pounds LONG before he's 4 years old! We like it not only for the great technical specifications, but because it's a sassy Wildcat blue, and Elias says it's VERY comfortable! Here he is trying it out in the living room before we put it in the car: 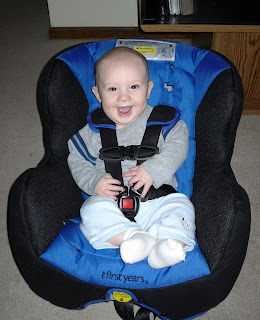 We took our first car ride in it yesterday, though, and he seemed to like it just fine! Not only is it a whole new adventure in the car, though, it means he's no longer riding in the infant carrier when we go to the store. Yesterday, he rode in a grocery store shopping cart seat for the first time, and I was VERY proud of how good he was! He sat up so well, just holding on to the handle and looking around. My BIG boy!
Posted by Joni at 12/06/2008 04:58:00 PM